Created 10-Oct-14
201 photos, 7 videos
Probably my favourite African country so far.Ugandans are very cheerful, vivacious, and friendly.As a former British colony almost everyone speaks English. As a white man I never felt threatened and it felt really safe. You'll probably fly into Entebbe airport. Scene of the "Raid on Entebbe" as portrayed on film. An Israeli commando unit led by Yonatan Netanyahu (brother of Israel's PM) was killed during the operation to free hostages. Entebbe is a pretty lakeside town on the shore of Lake Victoria. Uganda has magnificent wild places like Murchinson National Park, Queen Elizabeth NP, and many more.You'll see all the big animals you'd expect to see on safari. Though you must bear in mind that many of them are threatened from poaching and loss of habitat. A couple of subspecies of giraffe have been classified as endangered with only a few hundred remaining in the wild.Uganda, along with Rwanda and the DRC hold the last remaining eastern mountain gorillas. Only about 800 left in the world. I visited them in Bwindi Impenetrable National Park. A tough hike up through muddy trails, clambering through jungle. Before you can even join one of these tours you must show your international vaccination cert. They're afraid of the gorillas catching a human virus like the flu or yellow fever. Got to within a few meters of the gorillas.These gorillas are habituated and are used to tourists. They spend most of their time sitting around munching leaves.Saw wild chimps in Kibale Forest National Park. The chimps are much harder to see in the wild, they spend their time high in the trees and move around a lot. At Entebbe Zoo I fed orphaned 4 year old chimps. Such playful little fellows, I had peanuts to feed them with, and they climb all over you, but I had to watch my pockets or I'd find a pickpocket stealing, cheeky monkeys.The white water rafting on the Nile was at Jinja. A level 5 stretch of rapids, amazing experience!Though this is now threatened by the construction of a dam, it may soon disappear. At Murchinson National Park there's a gorge where the Nile gushes through, the sheer power of the water is mesmerizing. Near Fort Portal there's fantastic scenery with crater lakes, and an abundance of birds and monkeys.One thing that disappointed me was Ugandan food, it's based on starchy manioc and has little spice or flavour. They should learn from Ethiopia which has wonderful flavours. But the beer is good, Cheers!
Crossed into Rwanda and traveled by road to Kigali, the capital. In contrast to ramshackle Kampala in Uganda, Kigali has gleaming new high rise buildings, street lights that work, pavements that are not falling apart. It's very clean, plastic bags have been totally banned, though they are still smuggled in from Kenya. A former French colony,Rwanda changed its official language to English and had to switch from teaching in French to teaching in English the following year.
Like Mozambique it also joined the Commonwealth, in spite of neither country having any historical ties to Britain.You can also trek to see the gorillas in Rwanda, though it would cost about $700 as opposed to $500 in Uganda. (2014 prices) Expensive, but you'd hope this goes toward the preservation of our close relative. Poaching is a major problem.It was in Rwanda that the movie "Gorillas in the Mist" was set, based on the true story of Dian Fossey. I trekked in the Virunga mountains here, not to view gorillas as I'd already seen them. None the less, one goes with guides who carry firearms for protection. Stood at the graveside of Dian Fossey and her favourite gorilla called Digit. Lake Kivu is the big very deep lake between Rwanda and the DRC, methane is extracted as a source of energy.When one remembers what happened at Lake Nyos in Cameroon when a limnic eruption released poisonous CO2 and killed nearly 2000 people, extracting the methane this way is a smart idea. Rwanda was the scene of genocide in 1994 when the Hutu minority were slaughtered by their Tutsi neighbors, the Genocide Memorial in Kigali has a terribly sad and shocking display of photos of the murdered, many innocent little children. Hard to fathom such savagery, unbelievable! Relaxed at the lakeside town of Gisenyi, which has lovely sandy beaches. It's right beside the DRC. and you can see Mount Nyiragongo, an active volcano with a lava lake.. Another trip one day perhaps. 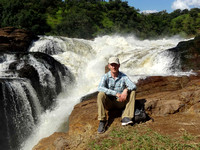 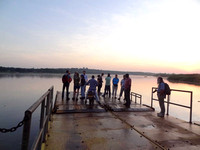 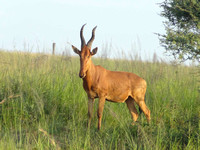